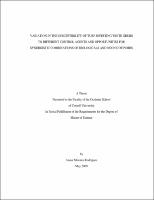 White grubs (Coleoptera: Scarabaeidae) are the most widespread and damaging pests in turfgrass habitats of the Northeast U.S. and their management is highly dependent on chemical pesticides. Best IPM is constrained by widespread reliance on early season preventive applications of imidacloprid as well as by a lack of biologically-based control alternatives. Part of the solution would be curative alternatives that would permit sampling and better decision-making, and biobased alternatives that could supplant reliance on chemical insecticides. This project?s focus on white grub control in turfgrass thereby represents the major pest complex in one of the most extensive and rapidly expanding components of our urban and rural landscape. As managed ecosystems, extensive and diverse turfgrass habitats require decision-making strategies to maintain them for their intended uses. Better managing this vast area will have huge positive impacts, especially considering that this habitat is intimately associated with human populations and that home owners can spray lawn chemicals with little regulation or training. Synergistic combinations of selected biological and chemical control products are one approach that might yield valuable alternatives for the management of soil insect pests. Chapter 1 summarizes laboratory studies that were conducted on third instar white grubs challenged by individual control products. The objective was to measure variation in the susceptibility of four invasive species of white grubs (Amphimallon majale, Anomala orientalis, Maladera castanea and Popillia japonica) to 18 registered and experimental insecticides used as curative controls under controlled laboratory conditions. Across white grub species, the most efficacious biological and chemical insecticide alternatives were the entomopathogenic nematode Steinernema scarabaei and chlorpyrifos, respectively. Biorationals were highly variable across target species. For biorational and chemical insecticides, A. majale was the least susceptible species. For biologicals, P. japonica was the least susceptible. Considering all control products, A. orientalis was the most susceptible. Chapter 2 summarizes a series of laboratory, greenhouse and field trials that were conducted on third instar white grubs challenged by combinations of control products. The objective was to screen numerous combinations of biological and sublethal doses of neonicotinoid insecticides against third instars under controlled laboratory conditions, and then to characterize those interactions as synergistic, additive or antagonistic. The most promising combinations were advanced to greenhouse pot studies and then to microplot field trials. To reveal variation across white grub species, trials were conducted on A. majale and P. japonica. Among the combinations of biological and neonicotinoids tested here, results revealed that synergistic interactions are relatively uncommon, and involved only entomopathogenic nematodes and fungi. For A. majale, the most promising synergistic combinations were between H. bacteriophora and both neonicotinoids; across all laboratory, greenhouse and field trials. In contrast, for P. japonica the most promising synergistic combinations were between B. bassiana and M. anisopliae Met F52 with clothianidin and M. anisopliae NYSAES with imidacloprid. Like A. majale, this was discernible in each of the two laboratory trials, but did not persist through to the greenhouse and field. Finally, an antagonistic interaction between Bt-products and both neonicotinoids was common to both white grub species. The magnitude of variation in susceptibility across white grub species supports the idea that a single product will not reliably suppress populations of all scarab taxa. This differential susceptibility could have broader consequences for grub management, if a numerically dominant target species is more completely suppressed than a co-occurring species. Synergistic combinations of biological control products with reduced rates of neonicotinoid insecticides could be a promising approach for the curative control of white grubs and as an IPM tool for the suppression of other soil insect pests.