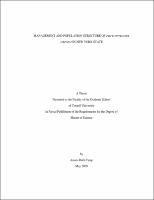 The oomycete Phytophthora capsici causes Phytophthora blight on many vegetable hosts, resulting in devastating losses for growers in New York and around the world. Management of this pathogen requires an integrated approach, and the goal of the research presented here is to contribute to continued improvements in management recommendations. With this goal in mind, the efficacy of the potential biological control fungus Muscodor albus to control Phytophthora blight on five sweet pepper cultivars and one butternut squash cultivar via biofumigation was tested in the greenhouse. Three different rates of M. albus grown on rye grain (0.55 g/L, 1.9 g/L, and 3.75 g/L), mefenoxam (Ridomil Gold EC, Syngenta Crop Protection, Inc.), or nothing, were added to P. capsici-infested potting mix, and sweet pepper or butternut squash seedlings were transplanted into the potting mix one week later. Plants were rated for disease severity on a scale of zero (healthy) to five (dead) one week after transplanting. Although application of the highest rate of M. albus slightly reduced disease severity on the intermediately tolerant sweet pepper cultivars (Alliance, Aristotle, and Revolution), commercially-acceptable control was only achieved with the highly tolerant cultivar Paladin. Even Paladin peppers which received no curative treatment had low disease severity ratings, so the levels of control achieved on this cultivar may not be due to application of M. albus. None of the applied rates of M. albus controlled Phytophthora blight on butternut squash, or on the highly susceptible pepper cultivar Red Knight. An improved understanding of the P. capsici population in New York will also help researchers to make better and more specific recommendations to local vegetable producers in the state. Therefore, in 2006 and 2007, 262 isolates of P. capsici were collected from 28 fields in New York and characterized for mating type and mefenoxam sensitivity. No mefenoxam-resistant isolates were recovered from farms in western and central New York, while resistant isolates were frequently recovered in the Capital District and on Long Island. Both A1 and A2 mating types were recovered from many fields across the state. Isolates from three fields in western New York (field WNY), the Capital District (field CD) and Long Island (field LI) were selected for further characterization using five microsatellite loci. Based on mating type and alleles observed at these loci, 12, 20 and 6 genotypes were identified in each field, respectively. Both mating types were recovered from all three fields, and in fields CD and LI, ratios of A1 to A2 isolates were not significantly different from 1:1, while the ratio in field WNY did deviate significantly from 1:1. Fields WNY and LI were not in Hardy-Weinberg equilibrium, but field CD was. All three fields were highly differentiated from each other, with pairwise fixation indices (FST) ranging from 0.224 to 0.586. Overall, nearly 46% of the variation across all three fields could be attributed to variation among fields, and P. capsici populations in these three fields had different levels of diversity.