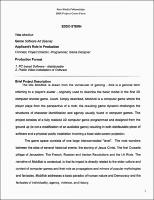 The title MobBob is drawn from the vernacular of gaming - Bob is a general term referring to a player's avatar - originally used to describe the basic model in the first 3D computer shooter game, Doom. Simply described, MobBob is a computer game where the player plays from the perspective of a mob; the resulting game dynamic challenges the structures of character identification and agency usually found in computer games. The project consists of a fully realized 3D computer game programmed and designed from the ground up (ie not a modification of an available game) resulting in both distributable piece of software and a physical public installation involving a fixed wide screen projection.