Magazine Covers and the 2008 Election: Fair or "Obamanation?" 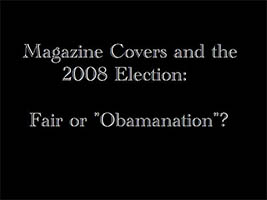 Hello everybody, My name is Hannah Milliken and this is a project I made for my English 2880 class at Cornell. I was raised in a pretty conservative home in Orange County, CA, and I always figured that when my first election rolled around, I would vote for a Republican. However, when the time came, I found myself really drawn to Obama, and ultimately, I cast my first vote ever for him (and I'm glad I did.) Lately, I've really been wondering why I felt so drawn to Obama. Is it the way he looks? Talks? Is it his personality? Is it what he stands for? His politics? Or am I just a mindless lemming who jumped on the Obama train without thinking? The more I think about it, the more I realize how much the media influenced the way many Americans, including myself, perceived the Presidential candidates. This is a small study of how magazine covers in particular created this sort of influence. The project certainly isn't perfect, but I really had fun making it and I hope you enjoy. Thanks, Hannah Milliken Class of 2012 Cornell University