Eternal Solutions and Heteroclinic Orbits of a Semilinear Parabolic Equation 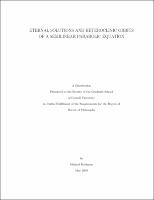 This dissertation describes the space of heteroclinic orbits for a class of semilinear parabolic equations, focusing primarily on the case where the nonlinearity is a second degree polynomial with variable coefficients. Along the way, a new and elementary proof of existence and uniqueness of solutions is given. Heteroclinic orbits are shown to be characterized by a particular functional being finite. A novel asymptotic-numeric matching scheme is used to uncover delicate bifurcation behavior in the equilibria. The exact nature of this bifurcation behavior leads to a demonstration that the equilibria are degenerate critical points in the sense of Morse. Finally, the space of heteroclinic orbits is shown to have a cell complex structure, which is finite dimensional when the number of equilibria is finite.