The Role of Cercopagis pengoi in Nearshore Areas of Lake Ontario 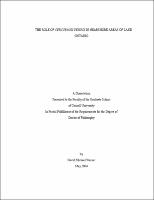 Exotic species introduced to Lake Ontario in the past 100 years have had varied effects on the food web. The exotic cladoceran Cercopagis pengoi is a zooplankton predator, and the effects of its establishment (in 1998) were difficult to predict without research conducted years since its introduction. Little to no work has been conducted at spatial scales necessary to examine the role of C. pengoi on a lakewide basis. This study was conducted to assess the relative importance of C. pengoi as prey and predator by examining its abundance, distribution, and potential impacts based on these variables and its trophic interactions with zooplankton and fish. Data from a number of field studies were used to develop equations relating acoustic size (target strength) to length and mass, which allowed estimation of abundance using acoustic surveys. Target strength varied significantly with length and mass. Target strength equations were significantly different from previously published equations. Field collections revealed that C. pengoi was an important prey item for only for juvenile and adult alewives > 66 mm total length. Due to the planktivorous nature of C. pengoi and similar distributions of these organisms, alewives and rainbow smelt also compete with C. pengoi. The relative importance of C. pengoi as prey and competitor depended on fish size and habitat use; habitat use determined the degree of spatial overlap, while fish size and the defensive spine of C. pengoi influenced the degree to which these fish were able to utilize C. pengoi during periods of spatial overlap. Late summer abundance of bosminids, Diacyclops thomasi, and copepod nauplii was significantly lower in 1998-2000 than 1995-1997, while abundance of Daphnia retrocurva did not vary significantly. Other factors that may have contributed to this decline were excluded by examination of their seasonal patterns. I concluded that predation by C. pengoi caused the observed declines. The relative magnitude of consumption by C. pengoi and alewives indicated that they were important predators and competitors and both were capable of structuring zooplankton community structure through predation.

Transactions of the American Fisheries Society