CHARACTERIZATION OF THE PHYSIOLOGICAL IMPLICATIONS OF DEFECTIVE LAMBDOID PHAGE DLP12 IN E. coli 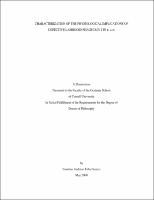 Most bacterial genomes are decorated with "non-species specific" genetic elements. These elements include defective prophages which account for up to 30% of some bacterial genomes. Defective prophages are trapped, due to mutation in or the absence of essential genes, in the chromosome in a permanent state of lysogeny. Although defective, several studies have reported that prophage genes benefit both gram positive and gram negative bacteria with respect to host fitness under a variety of conditions. DLP12 (Defective Lambdoid Prophage inserted in the 12th minute) is one of four defective lambdoid phages found in E. coli K12 chromosome. The DLP12 region encodes for putative holin (SDLP12), a putative lysozyme (RDLP12) and a putative endopeptidase (RzDLP12), which are all highly homologous to their counterparts in phage 21. Lambdoid homologs of these three genes facilitate the degradation of peptidoglycan causing cell lysis. Peptidoglycan is a heteropolymer made up of sugars and peptides. It is the main structural component of the bacterial cell wall. Although sturdy and highly resistant to turgor pressure, peptidoglycan must be a dynamic structure in order to allow cell growth and division. Thus, the regulation of peptidoglycan metabolism is critical and the enzymes involved in the process of peptidoglycan turnover must be tightly regulated in order to prevent unwanted cell lysis. Although recent work has shown that RDLP12 encodes an active lysozyme capable of degrading gram positive and gram negative peptidoglycan, its physiological role in E. coli K12 is unclear. We therefore constructed mutants of rDLP12 and the other DLP12 lysis gene in PHL628, an E. coli K12 derivative that over expresses curli, and found that the mutants had altered peptidoglycan metabolism. The mutants incorporated less exogenous N-acetylglucosamine into their peptidoglycan and released little or no peptidoglycan degradation products to the supernatant (Chapter 2). We also found that the DLP12 lysis genes play a main role in ?E mediated early stationary phase cell lysis. Consistent with effects on the cell wall, the mutants produced less curli which in turn affected cell-to-cell and cell-to-surface interactions and therefore biofilm formation (Chapter 3). We also found that normal transcription of the lysis genes appeared to be controlled by a putative antiterminator QDLP12 (Chapter 4). Antiterminators are transcriptional regulators which act on RNA polymerase holoenzyme to allow it to read through terminator sequences. In lambdoid phages the antiterminator Q is required for {sigma}D mediated transcription of the late genes, including the lysis genes. Interestingly, we obtained preliminary evidence that QDLP12 is required for {sigma}E mediated transcription of the lysis genes and that mutants of qDLP12 showed a similar phenotype to that observed in mutants for the DLP12 lysis genes (see above). In the following chapters we describe the implications of DLP12 genes for the physiology of E. coli and conclude that E. coli has co-opted these otherwise lethal genes for its own benefit.