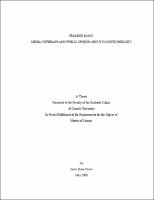 Recent studies have suggested that media coverage and public opinion about biotechnology was similar to nuclear energy and other "emerging technologies." To begin moving beyond individual cases and toward a broader theory, this study looks at a new emerging technology--nanotechnology--with the goal of attaining a better understanding of the complex interactions among media coverage, public opinion, and policy debates. The research attempts to provide two things: 1) an understanding of how the major news media have covered nanotechnology in recent years; and 2) a glimpse into public attitudes about nanotechnology in New York state. Presented first is a preliminary content analysis of nanotechnology coverage in the New York Times, Washington Post, Wall Street Journal, and Associated Press for the period between January 1, 1986 and June 30, 2004. Media attention to nanotechnology seems to parallel coverage of biotechnology in its early stages of issue development--starting out low and rising sharply as it spreads from "elite" media outlets to general outlets. As with biotechnology, coverage of nanotechnology throughout this period is overwhelmingly positive, focusing on progress and potential economic benefits, and with little discussion of attendant risks. Nanotechnology coverage does, however, focus somewhat more on risks from the outset than biotechnology did, suggesting that issues of public accountability are growing more salient to journalists. Indeed, the "public accountability" frame appears surprisingly early in nanotechnology coverage and remains a significant element throughout. This frame appears more often than the "runaway" frame and on a par with the "Pandora's Box" frame. This suggests that the media may be reflecting what risk communication scholars have long known: what really worry people are not scary "sci-fi" scenarios, but rather questions of trust and credibility, especially regarding public officials and multinational corporations. Also presented is a survey of public attitudes about the potential applications of nanotechnology in New York state. Telephone data were collected from February to March of 2005 from a randomly generated sample of New York residents (N=800). Nearly half of respondents said they had heard "not much at all" about nanotechnology, while only about 5% said they had heard "a great deal." Of the people who were willing to make an assessment, 33.2% said "benefits will outweigh the risks"; 14.9% said "risks will outweigh the benefits"; and 52.0% said "risks and benefits will be about equal" (mean: 2.19; SD: 0.9). Support for nanotechnology significantly correlated with higher levels of education and family income. This suggests that nanotechnology is only something more "elite" people are paying attention to, which corresponds with results from the media content analysis. Support for nanotechnology also significantly correlated with how much a respondent had heard about nanotechnology. Given the very low awareness among respondents, quite a few people (more than 70%) were still willing to make assessments about an unfamiliar technology. When synthesized with other research on this topic, these findings suggest that the general public support for nanotechnology--despite very low levels of knowledge and awareness--may be linked to the overwhelmingly positive media coverage, which has been consistently framed in terms of progress and economic prospects. In combination with their preconceived attitudes about technology in general, people may be taking cues from the media to tell them how to think about this new emerging technology. Still, nanotechnology coverage amounts to a very small part of the overall media landscape. It remains to be seen what, if anything, will launch it to a more prominent position.