Bioactivity of Trans Octadecenoic Acids: Uptake and Utilization for Milk Fat Synthesis in Dairy Cows and Effects on Biomarkers of Coronary Heart Disease Risk in the Golden Syrian Hamster 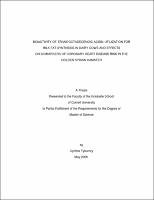 There are two main dietary sources of trans fatty acids (TFA): an industrial-derived source originating from the partial hydrogenation of polyunsaturated oils and a natural source associated with ruminant-derived food products. Industrial-derived TFA have been implicated in the progression of a number of chronic human diseases, especially coronary heart disease (CHD). These effects have not been observed for ruminant-derived TFA and differences could relate to the fatty acid composition of two TFA sources. Previous research has demonstrated that individual fatty acids, rather than dietary fats, are responsible for producing specific biological effects. With regard to TFA, however, the role of specific isomers and potential mechanisms through which individual isomers may elicit their bioactivity remain largely unclear. The present thesis research was carried out to investigate the biological activity of two trans 18:1 fatty acids, trans-9 18:1 (elaidic acid; EA) a major TFA in partially hydrogenated vegetable oil (PHVO) and trans-11 18:1 (vaccenic acid; VA), the predominant TFA of ruminant fat. The objective of the first study was to investigate the biological activity of EA and VA in dairy cows with regard to plasma lipid transport and mammary utilization for milk fat synthesis. We utilized three ruminally cannulated, mid-lactation Holstein dairy cows in a 3 x 3 Latin square design, and treatments were a 4 d abomasal infusion (~45 g/d; free fatty acid, FFA form) of 1) cis-9 18:1 (oleic acid, OA), 2) EA and 3) VA. There were striking differences in the fatty acid composition of the individual plasma lipid fractions and in the plasma lipid distribution of specific 18-carbon fatty acids. Infusion of the treatment isomers caused their specific increase in the various plasma lipid fractions, with OA and EA being predominantly associated with plasma phospholipids (PL), while VA was more evenly distributed between plasma PL and triglycerides. Treatments had no effect on milk production variables, including milk fat. Transfer efficiency of infused OA and EA to milk fat averaged 65.5 ? 3.0% and 59.7 ? 1.5%, respectively. Transfer of infused VA to milk fat averaged 54.3 ? 0.6%, of which approximately one-quarter was accounted for by its use for the endogenous synthesis of cis-9, trans-11 18:2 in milk fat. Notably, 18:2n6 and 18:3n3 accounted for 47.7% of total plasma fatty acids, but only 2.6% of fatty acids in milk fat. Overall, results demonstrated clear differences in the plasma transport and mammary uptake and utilization of 18-carbon fatty acids, and these relate to the location, orientation and number of double bonds. The second study was designed to investigate the biological effects of EA and VA on biomarkers of CHD risk. Hamsters (n = 32) were randomly assigned to 1 of 4 treatment diets: 1) Control, ?Western? diet, 2) PHVO, 3) FFA of EA and 4) FFA of VA. Fat supplements were fed at 2.5 g/100g of diet, and the EA and VA supplements averaged 84% purity for the respective trans 18:1 isomer. Hamsters fed the PHVO diet had higher total plasma cholesterol and higher concentrations of cholesterol in the atherogenic lipoprotein fractions, including very low-density lipoproteins, intermediate-density lipoproteins and low-density lipoproteins. Relative to the Control and PHVO treatments, hamsters fed the EA and VA diets had significantly lower total plasma cholesterol and lower cholesterol concentrations in the atherogenic lipoprotein fractions. Hamsters fed the EA treatment showed greater expression of the hepatic low density lipoprotein-receptor, indicating a possible mechanism to explain the reduction in plasma cholesterol. Overall, results demonstrated that the hypercholesterolemic effects of the PHVO supplement were not dependent on the presence of EA or VA.