An Integrated Management Strategy for Bacterial Speck Disease of Tomato in New York: Deciphering the Web of Induced Resistance 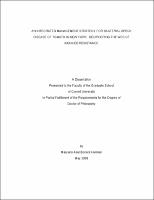