MOLECULAR ECOLOGY AND DIVERSITY OF METHANOGENIC ARCHAEA FROM NORTHERN PEATLANDS 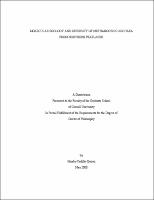 Peatlands are abundant in northern latitudes, containing nearly 30% of total soil carbon, and represent the most important natural source of atmospheric CH4. However, the methanogenic Archaea inhabiting these ecosystems have been scarcely studied. We characterized the 16S rRNA gene sequence diversity of Archaea in two NY State bogs, McLean (MB) and Chicago (CB), and in Michigan Hollow (MH), a minerotrophic fen. At all sites, we found a diverse community of mainly novel uncultivated archaeal groups. At both bogs, a group in the Methanomicrobiales we named E2 was dominant, making up 50-99% of total Archaea as indicated by terminal restriction fragment length polymorphism (T-RFLP) analysis and quantitative PCR. At MH, E1, a group related to E2, and Methanosaetaceae phylotypes were co-dominant and exhibited considerable diversity. We also examined archaeal communities in the rhizoplane of two contrasting vascular plants (Dulichium spp. and Sarracenia purpurea) in MB, and found nearly even distributions of Methanosarcinaceae, Rice cluster I and E2 phylotypes, in contrast with methanogenic communities in bulk peat. We used a methanogen-specific T-RFLP assay to direct the isolation of a novel genus in the previously-uncultured E1 group from MH fen, tentatively named. Methanosphaerula palustris strain E1-9c. Additionally, we isolated three potentially novel species in the genus Methanobacterium from other temperate and boreal peatlands. Complementarily, we assessed sequence microdiversity of the E2 group in MB and CB and observed greater microdiversity in MB compared to the more recently-formed CB. Simulations with an individual-based mathematical model indicated that the differences in the ecological development at each site may serve as a theoretical scenario to explain the microdiversity patterns. In addition, using T-RFLP analysis, we examined the methanoarchaeal community macrodiversity at 22 sites from North America and Europe. At temperate sites, an ecological pattern was suggested by the dominance of E2 in acidic bogs while E1 and Methanosaetaceae were dominant in minerotrophic fens. In more northern boreal peatlands, Methanosarcinaceae, Rice cluster-II, and Methanobacteriales represented important fractions of the community not observed in temperate sites. These observations provide an initial understanding of methanoarchaeal communities useful in predicting effects of global climate change on peatland methanogenesis.