The origins and spread of Aspergillus sydowii, an opportunistic pathogen of Caribbean gorgonian corals 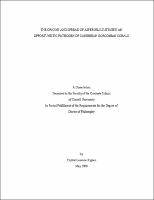 Coral reefs are increasingly suffering outbreaks of disease, causing dramatic declines in population abundance and diversity. One of the best-characterized coral diseases is aspergillosis, caused by the fungus Aspergillus sydowii. My dissertation investigates the origins and spread of aspergillosis in Caribbean gorgonian coral communities. The role of host resistance in aspergillosis is well established, however we know little about variation in resistance through time or the role of pathogen virulence. Using geographically distinct pathogen isolates in a clonally replicated design, I found equivocal evidence for variation in host response to pathogen isolates, with most fungal treatments showing no difference from the control. Interestingly, the two isolates that did induce a host response represent a pathogenic and an environmental isolate, suggesting that Aspergillus sydowii is a true opportunist. Aspergillus sydowii is a globally distributed saprophyte commonly found in soil, so its presence in marine systems raises questions about its origin. Using microsatellite markers, I analyzed the population structure of A. sydowii from diseased sea fans, diseased humans, and environmental sources worldwide. The results indicate a single global population. Moderate differentiation between isolates from sea fans and those from environmental sources, along with higher growth rates at 37C by sea fan isolates, suggests that selection within the marine environment could be driving population subdivision. Past researchers have suggested that Aspergillus sydowii originates from African dust blown into the Caribbean, and have identified Aspergillus from dust samples, although only to the genus level. To test this hypothesis, I isolated fungi from dust samples collected in Mali and St. Croix. Although I identified seven species of Aspergillus from airborne dust samples, none were found to contain A. sydowii. Finally, the role of vectors in facilitating disease spread is poorly studied in marine systems. A specialist predator of gorgonian corals, Cyphoma gibbosum, is a likely vector for aspergillosis. I found viable fungus in the feces of snails fed spores and hyphae, and a preference by snails for diseased sea fans. Stable isotope studies confirm the role of C. gibbosum in between-host transmission, supporting the hypothesis that this snail is acting as a vector for aspergillosis.