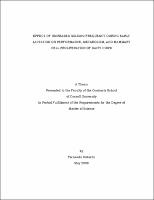 Researchers have been interested in increased milking frequency (IMF) during early lactation only as a management practice to increase lactational milk yield. Initial work suggested that effects of early lactation IMF on milk yield persisted after cows returned to a normal milking frequency scheme, although milk yield responses have been variable among studies. The first study (Chapter II) was designed to test the consistency of the milk yield responses to early lactation IMF under different management conditions on four commercial dairy farms. Cows (n=421) were enrolled in this study and assigned within farm at calving to either a 2x control treatment or a 4x IMF treatment for the first 21 d postpartum followed by a return to 2x milking. Cows milked 4x were milked at the beginning and end of each scheduled milking. This resulted in minimal milking intervals for the 4x cows of 3.5, 4, 5, 5.5, and 6 h for the four farms, respectively. Milk yield and component responses were evaluated on three of the farms across the first 7 monthly test days. Early lactation IMF increased overall milk yield by 2.1 kg/d on these farms (P < 0.01). Analysis by farm suggested that the magnitude of the response was farm-dependent and ranged from 4 to 10%. Early lactation IMF generally decreased milk component percentages but increased component yields. The treatment had no effect on BCS on any of the farms; however, circulating NEFA in serum samples collected during the period of IMF were increased in two farms and not affected in the other two, suggesting the influence of farm-specific factors. In the second experiment (Chapter III), metabolic responses to early lactation IMF and mammary cell dynamics were evaluated. Primiparous (n=30) and multiparous (n=30) Holstein cows at the Cornell University Dairy Teaching and Research Center were assigned at calving to one of 2 treatments. The control group was milked 2x for 119 d while the IMF group was milked 4x from d 2 postcalving until d 21 and 2x from d 22 until d 119. Overall responses of milk yield to early lactation IMF were not significant over the first 119 d postpartum; however, the interaction of treatment by week was significant in that IMF cows yielded 4.8 kg/d more milk than control cows during wk 2 and 3, but had comparable milk yields to controls thereafter. Milk component yields did not differ between treatments. Milk yield responses to IMF were apparent in primiparous cows when cows that did not receive mammary biopsies were analyzed separately. Early lactation IMF increased dry matter intake during the first 21 d postcalving but not the 119-d postpartum period. Early lactation IMF did not affect BCS or BW. Concentrations of plasma NEFA were increased in multiparous but not primiparous cows during the period of IMF, suggesting that energy status of multiparous cows may have limited their responses to early lactation IMF. Concentrations of plasma BHBA were not affected by treatment. Mammary tissue was collected by biopsy in a subset of cows (n=8 cows per lactation group and treatment) at calving and at 21 and 75 d postpartum and used for immunohistochemical localization of Ki-67. A treatment by day interaction existed for the percentage of labeled epithelial cells such that the IMF treated cows had a lower percentage of labeled epithelial cells on d 21 but a higher percentage at d 75. Further analysis is needed for determination of apoptosis rates to determine difference in cell turnover between treatments as well as cell activity in order to pinpoint possible mechanisms for the milk yield responses to early lactation IMF.