Presence and Fate of the Endocrine Disrupter Octylphenol 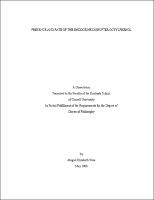 Octylphenol (OP) and nonylphenol (NP) are structurally similar surfactant metabolites that have estrogenic properties. NP has been shown to undergo a type II ipso substitution degradation mechanism, however no gene(s) have been identified that encode this activity. Sphingomonas sp. PWE1 was isolated from sewage sludge enrichments based on its ability to grow on OP. PWE1 DNA was heterologously expressed in an E. coli fosmid library. Clone aew4H12 was identified and sequenced with transposon mutagenesis to reveal a single open reading frame, opdA, which had homology with FAD-dependent monooxygenases. When opdA was subcloned in E. coli, OP disappearance was accompanied by hydroquinone and 2,4,4-trimethyl-1- pentene formation. This demonstrates that the type II ipso substitution observed in PWE1 during OP degradation is encoded by opdA. OP degradation in PWE1 was then compared with NP degraders Sphingomonas sp. TTNP3 and Sphingobium xenophagum Bayram. Both strains were found to contain homologs to opdA. When expressed in E. coli, the cloned genes were found to be necessary for OP disappearance and concomitant formation of both HQ and 2,4,4-trimethyl-1-pentene. Southern hybridizations showed differences between the wild-type strains when probed with opdA. Induction experiments with wild-type strains demonstrated that OP-degrading activity and opdA mRNA accumulation were inducible in Bayram, but not in PWE1 or TTNP3. Gene sequencing revealed 5 amino acid differences between the three strains. While the gene sequence was conserved, there appeared to be differences in genetic context and activity in the wild-type strains, suggesting regulatory differences. These differences were most obvious with respect to degradation of OP-related substrates NP degradation has been shown to be temperature-dependent in laboratoryscale studies so we wondered if sewage sludge collected during different seasons might have different levels of pollutants. NP and OP, as well as the antibacterial triclosan and fragrance compound HHCB, were monitored seasonally in anaerobically digested sludge samples from New York State. Samples from four sites were analyzed by accelerated solvent extraction and GC-MS. There were variations in the seasonal pollutant levels in sludge from the same site, but no correlations between sites, suggesting NP, OP, triclosan, and HHCB concentrations in sludge were not seasonally dependent.