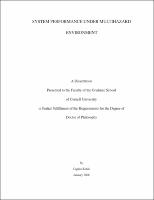 Natural hazards such as earthquakes, tropical and extratropical storms, tornadoes, floods and droughts are known for their destructive impacts on life, economy and environment. Although it is not possible to completely avoid damage due to such disasters, it may be possible to minimize their devastating effects by enhancing resilience in communities, that is, by reducing failure probability of infrastructural systems, consequences of system failures, and time to recovery. System failure probability and recovery time can be reduced by increased system performance through retrofitting and rehabilitation. However, due to limited resources and budget constraints, it is important to identify the most critical systems and prioritize their mitigation with the objective of minimizing the expected losses due to natural hazards. These decisions are based on performance level for a service and cost estimates. In addition to current hazard-specific vulnerability methods, a multihazard approach is necessary for assessing the long-term impact of mitigation strategies on system vulnerability, ensuring that strategies implemented to mitigate one hazard do not amplify the vulnerability to another hazard, and evaluating the relative importance of various hazards. This study presents a new methodology for (1) assessing performance of structural/nonstructural systems subjected to multiple hazards during their lifetime and (2) identifying a strategy from a collection of design alternatives that is optimal in some sense. System performance is measured by the total lifetime losses and the system fragility, that is, the probability that a system response exceeds a critical value subjected to a hazard event specified by its intensity and other parameters. Accordingly, fragility is a surface with support the defining parameters of a hazard. The methodology is based on site hazard analysis, system fragility analysis and capacity and cost estimation. The proposed methodology is probabilistic in nature since (1) the intensity and arrival time of different hazards, such as earthquakes and hurricanes, (2) the loads acting on the system due to a hazard event, such as, ground accelerations and wind velocities, and (3) some of the system characteristics, are generally uncertain. Consequently, probabilistic models are developed for characterizing natural hazards occurring at a given site at single/multiple points. These models specify (1) the random arrival times of individual events at a site during a reference time, (2) the random properties of the hazards under considerations at these times, and (3) the random loads acting on the system due to each event. For a system in a multihazard environment the occurrence of both individual and coincidental hazard events are considered. We present two methods for estimating system fragility, crossing theory of stochastic processes and Monte Carlo simulation. The proposed models are implemented in computer programs and the life-cycle risk analysis methodology is illustrated through numerical examples. In the first example MCEER West Coast Demonstration Hospital is analyzed to identify an optimal rehabilitation strategy with respect to total life-cycle losses using the concepts of seismic activity matrix and fragility surfaces. It is shown that proposed retrofitting alternatives do not change the mean value of the life-cycle costs significantly, however, the probability of exceeding large costs is lower for the retrofitted systems. The second example discusses the case of a typical offshore platform under earthquake and hurricane hazards. This example has demonstrated how different hazards can be dominant at different reliability levels. The last example presents a method for selecting an optimal maintenance policy for a deteriorating system by minimizing the total life-cycle cost such that system reliability at any given time is greater than a specified level.