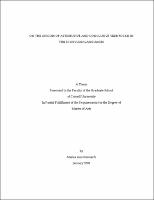 The islands of the Ryukyu archipelago, now comprising the Japanese prefectures of Okinawa and part of Kagoshima, were originally a separate kingdom before being annexed by Japan. The language(s) (or dialects) of these islands are commonly regarded as the only confirmed sister language(s) to modern Standard Japanese and its dialects. Scholars have long compared Ryukyuan and Japanese for clues to the prehistories of both languages, and in search of a single Proto-Ryukyuan/Japanese language. The earliest recorded ancestor of modern Standard Japanese dates back to roughly the 8th century A.D., whereas most Ryukyuan language groups have never been written down. In the face of scant historical records and no other confirmed relatives, the early histories of the various Japanese and Ryukyuan dialects remain shrouded in mystery. Two of the most looming questions are when the two language groups split, and whether or not Ryukyuan split off from the proto-language as a whole, or if various language subgroups broke off at different times. To this day, various degrees of mutual intelligibility make it difficult to postulate whether what is spoken in the Ryukyuans should be called ?dialects? of Ryukyuan or separate ?languages? in a Ryukyuan family. This paper examines a small part of this puzzle in an attempt to sort out the relationships between the Ryukyuan languages to each other and to Standard Japanese. Middle Japanese includes a complicated series of verb forms that correspond to a variety of syntactic functions. One of these verb forms, the Conclusive, is used for sentence-final indicative verbs, while another, the Attributive, is used either as a nominalized verb, or to modify a noun in relative clause constructions. The distinction between the Conclusive and Attributive verb morphology, although long lost in Standard Japanese, has been retained in many Ryukyuan dialects. Furthermore, the Ryukyuan data for the Conclusive and Attributive forms is quite complex; some dialects show more than one suffix for each function while others retain distinct but redundant forms. This paper analyzes the Conclusive and the Attributive verb forms, as well as other related key verb forms, by comparing their morphology in various Ryukyuan dialects. A geographic (and long-assumed linguistic) divide exists between the islands in the northern part of the Ryukyu archipelago and the islands in the south, as well as further divides within these two groups. This paper examines the Conclusive and Attributive within each of these subgroups, and then draws a conclusion about the likelihood that these subgroups are related to each other. This paper largely agrees with previous analyses that Attributive and Conclusive verb morphology in Northern Ryukyu dialects featured a stage of development involving a compound of the Continuative form and the existential verb wori. However, close comparison suggests that the Southern Island dialects feature an older, plain vowel morpheme in the Attributive and Conclusive morphology, most likely a /-u/, which predates the Northern Island Continuative-wori compound. The /-u/ suffix found in the Southern Islands closely resembles the /-u/ Conclusive-Attributive suffix found in Standard Japanese, suggesting that both the Southern Islands and Japan have retained this older form, while the Northern Islands, located in the middle of these two, have diverged.