Soldiers of God - War, Faith, Empire, and the Transformation of International Orders from Calvin to Al Qaeda 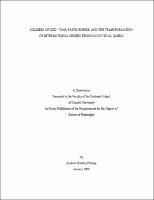 What accounted for the transformation of historic international orders such as that of medieval Latin Christendom and the suzerain state system of nineteenth century East Asia? And what can the demise of both of these orders tell us about the modern state system's present condition and long-term prospects? This dissertation engages these questions by undertaking a macro-historical investigation of the transformation of international orders from the Protestant Reformation through to the present era. I argue that international orders consist of constellations of constitutional norms and fundamental institutions through which cooperation is cultivated and conflict contained between different political communities. International orders rest on authoritative forms of power deriving from shared conceptions of the good, as well as coercive forms of power inhering in dominant forms of legitimate organized violence. These orders are transformed when pre-existing patterns of institutional decay intersect with systemic ideological schisms and dramatic material increases in the scale and scope for violence between political communities. This argument is tested through a consideration of two epochal transitions in world history, specifically the emergence of the Westphalian state system from Christendom's ashes in the sixteenth and seventeenth centuries, and the nineteenth century destruction of the East Asian Sinosphere and the region's subsequent incorporation into a Western-dominated sovereign state system. In both cases, I demonstrate that international orders were transformed as a result of coherent conjunctures of institutional decay, religiously inspired ideological challenges to the old order, and destabilizing increases in violence interdependence occasioned respectively by the European military revolution and the nineteenth century industrialization of war. I then identify analogous subversive processes now active within the contemporary state system, before identifying measures that must be taken if the state system is to avoid its predecessors' sorry fate. These findings carry important implications for our understanding of the nature of international order, the dynamics of international systems change, the trajectory of global political evolution from 1500 CE to the present, and the long-term viability of a universal system of sovereign states.