Productivity Spillovers Within Families and Firms 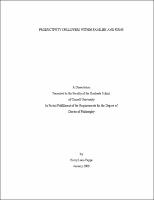 Economists have traditionally assumed that people's productivity in the labor market is determined solely by the choices they make over the course of their lifetime and have paid relatively little attention to the possibility that productivity might be influenced by the attributes and decisions of the people they live and work with. This dissertation reports evidence that such productivity spillovers exist, both within households and within firms. The first chapter examines whether a person's work hours are influenced by his/her likelihood of changing marital state. Data from the National Longitudinal Survey of Youth 1979 are used and three different methods for measuring the probability of marriage and divorce are employed. Consistent with theoretical predictions, married women are found to work more when they face a high probability of divorce. This relationship holds both over an individual's life-cycle and across people with different inherent risks of divorce. The second chapter explores whether team-mate performance influences individual performance and salaries in Major League Baseball. Team-mates may inflate a player's output in a single year or they may have a lasting influence on his performance. Evidence of these effects, which are termed spillovers and learning, respectively, are found among both pitchers and non-pitchers. Pitchers are more likely to post low earned run averages if other pitchers on their team achieve low earned run averages in the same season or the previous season. Batters tend to have high batting averages if their team-mates had high batting averages in the previous season. Team performance measures are found to have some direct influence on salary, however they operate largely indirectly, by augmenting individual performance. Finally, the third chapter examines the effects co-worker ability has on wages in the wider labor market, using matched employer-employee data that have been constructed by the United States Census Bureau. The average levels of education and tenure among a person's co-workers are found to have a positive effect on wages, indicating the presence of human capital spillovers. Co-worker tenure has a bigger impact on new entrants to a firm. In contrast, co-worker education has a larger effect on highly-educated workers.