A Contribution to the Reconstruction of the Marxist Perspective 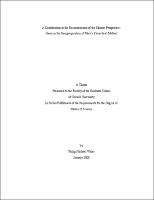 This thesis is primarily concerned with and motivated by the broad and overarching question of how can contemporary coming of age intellectuals learn and employ a Marxist perspective to understanding and changing the troubled world that they inherit? The actual and primary research question for this thesis is how have previous generations of intellectuals appropriated (in the case of Marx) or reappropriated (in the case of Gramsci) the Marxist method? It is possible to frame the structure of this thesis historically in terms of Karl Marx's creation of the Marxist perspective and then Antonio Gramsci and Michael Burawoy's reconstruction of the Marxist perspective. The historical chapter on Marx, who begins the intellectual lineage, is followed by a historical chapter on Gramsci, an early example of the reappropriation of the Marx's method, and then a more contemporary chapter on Burawoy's reconstruction of Marxism. The Marx chapter reviews the challenges to arriving at an understanding of Marx's method and then suggests an approach for overcoming those challenges. In this, it relies heavily upon the work of Bertell Ollman, whose work also serves as the basis for a systemic investigation of Marx's method. The historical investigation of Marx's method reviews Marx's biography and engagement with the intellectual currents of his day. The Gramsci chapter is organized around two themes: Gramsci's envisioned but unrealized plan for the reconstruction of Marxism and Gramsci's actual reconstruction of Marxism. In particular, this chapter focuses on Gramsci's appreciation of the need for confronting the Marxist revisionism of his day with a systematic reappropriation of Marx's dialectical method. Accomplished through rigorous study and polemical battles, Gramsci's reappropriation of Marx's method served as the foundation for his political theory. The chapter concludes with the assertion that Gramsci's political theory can only be understand in the context of his dialectical method. The Marx and Gramsci chapters clarify both what's involved in Gramsci's reappropriation of Marx's method and the method itself. With respect to the philosophical underpinnings of the method, the thesis has underscored the method's ontology and epistemology. The ontology is characterized by materialism and what Ollman calls the philosophy of internal relations; its epistemology is characterized by a dialectical realism and a focus on abstraction. With respect to its broad research guidelines, Marx's method suggested an investigation that began with system before history through what Ollman calls Marx's "dance of the dialectic." For both Marx and Gramsci, critique was an integral part of the method as a whole as well as a technique that they employed in clarifying for themselves and others the inconsistencies of rival theoreticians and the possibilities of their historical situations. For both Marx and Gramsci, the totality of their method including its internal and external relations developed through a critical and revolutionary engagement with unfolding epochal and conjectural processes and contending understandings of these processes. The Burawoy chapter focuses on a contemporary reconstruction of the Marxist perspective. What emerges in the Burawoy chapter is a serious polemic in the tradition discussed above. As such the Burawoy chapter provides the vehicle for: 1.) integrating and synthesizing the lessons of the thesis; and 2.) bringing these lessons to bear on a critique of Burawoy that thus models a polemic as a means of intellectual reconstruction and presentation, reappropriation and rejuvenation.