DID SHE DO IT ON PURPOSE? : YOUNG CHILDREN'S PERFORMANCE ON YES/NO AND MULTIPLE CHOICE QUESTIONS ABOUT INTENTIONS 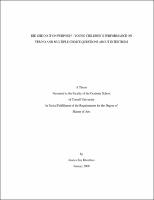 While children demonstrate the ability to understand others? intentions as early as 6 months of age, they are not able to verbally answer questions about intentions until between 3 and 6 years of age. The present study was designed to explore whether different question formats influence the accuracy of children?s responses to questions about intentions, and whether the development of executive attention plays a role in children?s ability to answer questions about intentions. Seventy-nine preschool children between 3 and 5 years of age were recruited for this study. Children viewed videos of playground events involving two main characters. Within this video there were three events which were performed either on purpose or by accident. After the video, children were asked a series of questions including prompts about the intentions behind the three target events. Children were significantly worse at answering questions about intentions as compared to questions which did not involve intentions. Children demonstrated an overall ?yes? bias for intentions and non- intentions questions. For intentions questions, this means that they were most accurate when they were asked yes/no questions where the answer should be ?yes? (Match) and least accurate when they were asked yes/no questions where the answer should be ?no? (NonMatch). They were equally accurate at Match and forced-choice questions. There was an interaction with age for the non-intentions questions so that younger children were more prone to demonstrate a ?yes? bias and show increased accuracy for Match questions and decreased accuracy for NonMatch questions. Younger children were equally accurate at Match and forced-choice questions, and more accurate at forced choice questions than NonMatch questions. Executive attention measures predicted children?s accuracy for NonMatch, non intention questions. The results are discussed in terms of forensic applications.