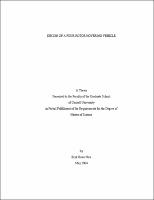 Potential applications of autonomous vehicles range from unmanned surveillance to search and rescue applications dangerous to human beings. Vehicles specifically designed for hover flight have their own possible applications, including the formation of high gain airborne phased antenna arrays. With this specific application in mind, the Cornell Autonomous Flying Vehicle (AFV) team sought to produce a four rotor hovering vehicle capable of eventual untethered acrobatic autonomous flights. The mechanical design of the AFV included both the selection of a battery-motor-gearing-prop combination for efficient thrust production and the design of a lightweight yet sufficiently stiff vehicle structure. The components chosen were selected from the variety of brushless motors, battery technologies and cell configurations, and fixed pitch propellers suited to use in a four rotor hovering vehicle. The vehicle structure settled upon achieved a high degree of stiffness with minimal weight through the use of thin walled aluminum compression members supported by stranded steel cable. In addition to an efficient mechanical design, the vehicle also required onboard control and inertial navigation. In order to evaluate a variety of potential vehicle sensor, actuator, estimation, and control scenarios, a fully configurable nonlinear simulation of vehicle and sensor dynamics was also constructed. For the current iteration of the vehicle, a square root implementation of a Sigma Point Filter was used for estimation while a simple Linear Quadratic Regulator based on the nonlinear vehicle dynamics linearized about hover provided vehicle control. Sensory feedback on the current vehicle included an onboard inertial measurement unit and a human observer, to be eventually replaced by GPS or an indoor equivalent. While a hardware failure prevented the completion of a full range of tests, the team was able to complete a hands-free hover test that demonstrated the capabilities of the vehicle. Supplemented with various other final hardware tests, the vehicle demonstrated stable hover flight, potential vehicle endurance in the range of 10-15 minutes, and possible vertical acceleration of 0.8g beyond hover thrust. The final vehicle represented a significant achievement in terms of overall design and vehicle capability while future improvements will demonstrate more advanced nonlinear control algorithms and acrobatic flight maneuvers.