MASCULINITY, WAR, AND REFUSAL: VICISSITUDES OF GERMAN MANHOOD BEFORE AND AFTER THE COLD WAR 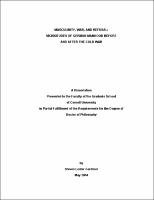 MASCULINITY, WAR, AND REFUSAL: VICISSITUDES OF GERMAN MANHOOD BEFORE AND AFTER THE COLD WAR Steven Lester Gardiner, Ph.D. Cornell University 2004 Over the course of the last two centuries, Germany has experienced several shifts in its position in what I refer to as the war system. The war system is an important determiner of masculinity such that variations in one impact the other. The total surrender of Germany in 1945, combined with the association of the Nazi regime with heroic, soldierly masculinity, has opened the door in post-World War II Germany for new forms of masculinity to arise. A key value in the new configuration is the increased importance of refusal and the decreased importance of obedience and subordination. Between 1945 and 1990, Germany remained a nation both divided and occupied. This, combined with the literal feminization of German society in the immediate post-war period, led to the valorization of refusal. In effect, in an occupied society, the relationship of masculinity to nation-state is shifted. At the same time, of course, market pressures have led to a more individuated society?yet it is important to point out that though refusal has become much more common in all Western societies, in none of the traditional Great Powers has the culture of the military itself become so accommodating to the idea of refusal. This shift, I think, can be attributed to the institutionalization of refusal within the Bundeswehr, and its valorization in German society as a whole, as subsequent generations encounter the failed refusal of the Nazi period in a war system context that has isolated the German military from deadly combat?a situation which is, of course, changing in the here and now. These trends can only really be understood through an analysis that triangulates on changing masculinity by making use of a variety of evidence, historical, literary, institutional and personal. Finally, the relationship between war and masculinity itself should be seen in a longer evolutionary perspective and assumptions about inevitability challenged through comparative ethnography and review of the archeological evidence.

A Dissertation Presented to the Faculty of the Graduate School of Cornell University in Partial Fulfillment of the Requirements for the Degree of Doctor of Philosophy. May 2004. Department of Anthropology.