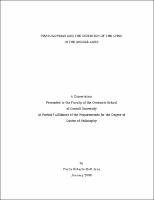 This dissertation seeks to reconcile Piers Plowman's continual use of popular lyric traditions with the concerns that the poem raises regarding the moral value and didactic efficacy of poetic "making." The lyric is crucial to both the structure and poetic methods of Piers Plowman, shaping the poem's most complex literary effects while bringing to focus the poem's interrogation of the utility of literature generally. The result is that Piers Plowman is at its most and least "literary" when it is being lyrical; although its lyric passages evoke popular modes of song and entertainment, they are, simultaneously, often so oddly integrated that their value is called into question. Both in its form and the expository discourses of its allegorical characters, the poem unites its unusual concordance of medieval poetic genres and commonplaces under a guiding principle of the ethics of literary production and consumption, yet also generates a continual friction between its modus agendi, or "way of proceeding," and its literary models. Grasping this aspect of the poem's achievement requires an investigation into medieval ideas of genre in general, and the lyric in particular, that has not been carried out for the poem so far. The first chapter reviews modern critical notions of the lyric genre in light of the corpus of medieval short poetry, which has largely resisted systematic classification. It concludes with a reading of Chaucer's Troilus and Criseyde that demonstrates the utility of modern lyric criticism to the interpretation of medieval hybrid narratives. The second chapter explores grammatical treatises, glosses, and commentaries in order to identify a genuinely medieval taxonomy of genre and the place that lyric might have had in it. Chapters three and four employ the interpretative strategies developed in the first half of the dissertation to perform readings of Piers Plowman's lyricism. Chapter three focuses on the medieval lyric's potential to create an experiential literature--a literature with which the audience personally identifies--and its importance to Piers Plowman's idea of a moral poetics. Chapter four investigates the final passus of Piers Plowman and the lyric's central role in the sacred re-enactments that it stages.