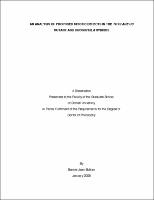 Animals homozygous for mutations in the toys are us (trus) gene are developmentally stunted and third instar lethal. The phenotype was initially proposed to stem from a mitotic defect, but has since been associated with a defect in the ecdysone pathway. In addition trus1 mutants lack optic lobes, have malformed imaginal discs, and are often missing the imaginal cells of the salivary glands, all of which are known hallmarks of ecdysone deficient mutants. Trus is primarily expressed in the prothoracic cells of the ring gland, which is the main location of ecdysone synthesis. To test if Trus might play a role in ecdysone synthesis, I fed larvae 20HE precursors, all of which are able to overcome the developmental delay. I have tested the effects of the trus1 mutant on expression levels of ecdysone pathway genes by constructing double mutants with trus1 and members of the ecdysone pathway. Recent results of TAP-tagging experiments indicate that Trus is in a tight complex with the products of the string of pearls gene, which is the S2 subunit of the small ribosomal subunit, and Elongation Factor 1-?. My findings are consistent with a model that Trus acts downstream of PTTH but upstream of the ecdysoneless gene to promote the translation in the ring gland of mRNAs for genes in the ecdysone pathway. Matings between D. melanogaster females and males of sibling species in the D. melanogaster complex yield males that are also developmentally devalyed and die at a stage similar to the trus1 mutation (prior to pupal differentiation). I have re-examined a previous report suggesting that the developmental defects in hybrid males may be the consequence of problems in mitotic chromosome condensation. I found in contrast that the frequencies of mitotic figures, as well as cells in S phase in the brains of hybrid male larvae are extremely low. The cells in hybrid male brains appear to be particularly sensitive to environmental stress; my results indicate that certain in vitro incubation conditions induce widespread cellular necrosis in these brains, causing an abnormal nuclear morphology noticed by previous investigators.