Reflectance change due to surface roughness--with applications to ocean optics 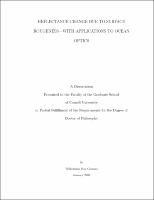 A simple sinusoidal function is used to study the reflectance change from a rough, homogeneous surface in two dimensions along the solar plane, and in three dimensions for a full hemispherical distribution. Results indicate that, for nadir viewing, observed radiance decreases substantially as roughness increases, but that there is virtually no change in the spectral character of the radiation. Second order reflectance contributes little to the overall reflectance even for the roughest surfaces considered. Shadowing and obscuration result in abrupt changes in reflectance for large viewing or illumination angles, which are likely to be insignificant for above-water, nadir-viewing instruments. Light reflected into different directions by a rough, locally diffuse surface loses its Lambertian behavior as roughness increases. The darkening of a surface as observed by a remote sensing system is due to the redistribution of light into the retroreflection and forward scattering directions. It is shown that the geometric variation that causes the surface roughness alone can significantly affect the apparent roughness of a surface. An analytical expression is developed that describes the near-field situation and that shows how the far-field condition is reached. To study how light is redistributed as it reemerges from an air-water-bottom system consisting of roughened surfaces with subsequent changes in indices of refraction, the surface representation is transformed from a three-dimensional function describing the location and orientation of facets to a point in space with facet tilts varying according to a statistical distribution. Specular reflections from the surfaces are transferred in the system using Mueller matrices and Stokes vectors in order to include polarization that cannot easily be handled using other formulations. Model predictions match published observations. As with a diffuse surface, specular reflections are redistributed with surface roughness. The specular peak initially appears to be centered around the specular direction but moves toward the horizon with increasing incidence angle. This peak also widens with roughness but at the same time decreases in intensity. Light is polarized as it interacts with each surface in the system, however, without absorption or scattering in the medium there is very little or no significant overall effect.