Cicero on the Philosophy of Religion: de Natura Deorum and de Divinatione. 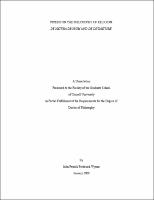 Cicero wrote de Natura Deorum (dND), de Divinatione (Div.) and de Fato (Fat.) in succession and describes the latter two as continuations of the first. I argue that the three dialogues form a trilogy, in which Cicero as author indicates a stance on the material he presents (but that too little of the fragmentary Fat. remains to be useful for my purposes). There are much-debated attributions of preferences to Cicero's propriae personae at the conclusions of dND and Div.; I take these preferences to express Cicero's authorial stance. I examine relevant parts of the speeches to which they react and, first, make philosophical interpretations of each (often comparing other sources for Hellenistic thought) and, second, pay attention to the interaction of Cicero's characterization of each speaker with the arguments the speaker gives. I find that Balbus in dND advocates the avoidance of superstition and the reform of religious beliefs in line with Stoic physics and that Cotta has a strong commitment to traditional Roman religious views consistent with his sceptical epistemology. Cotta's scepticism is elusive in its details but perhaps yields a kind of fideism. I find that Quintus Cicero's advocacy in Div. of a Stoic account of divination (one that was developed after Chrysippus fully to distinguish two kinds of divination, natural and artificial) is formally based on empirical arguments for a natural divinatory capacity in humans and the possibility of fallible empirical divinatory arts. But Quintus also provides a theory of divination based in Stoic pneuma theory, psychology, theology and fate. Marcus Cicero's reply makes a general argument against the prospects for divination in a Stoic fated world, and many specific arguments against Quintus' empirical data that accept the data but suggest that they do not support the reality of divination. Cicero's authorial stance, it emerges, is that traditional religion should stand but that religious beliefs should be reformed in line with physics (for him nature, eternal and admirable, is divine) broadly as Balbus suggested (hence Cicero's vote against Cotta in dND), but that belief in divination errs by that very standard and is superstitious.