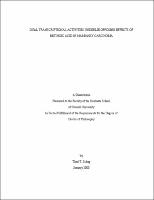 The vitamin A metabolite retinoic acid (RA) regulates potent anticarcinogenic activities and it is well established that these activities are mediated by retinoic acid receptors (RAR), ligand-inducible transcription factors that are members of the superfamily of nuclear hormone receptors. Transcriptional activation of RAR has been shown to trigger differentiation, cell cycle arrest, and apoptosis. However, in some cancers, RA facilitates rather than inhibits cell growth, but the basis for development of RA-resistance remains incompletely understood. Here we show that the pro-proliferative activities of RA are mediated through a different nuclear receptor, the peroxisome proliferator-activated receptor ?/? (PPAR ?/?). The data show that partitioning of RA between the two receptors is cell-specific: in RA-resistant cells, RA activates PPAR ?/? and functions as a survival factor, while in others, it operates through RAR and triggers apoptosis. We demonstrate that the partitioning RA between its two receptors is regulated by two intracellular lipid binding proteins, cellular retinoic acid binding protein II (CRABP-II ) and fatty acid binding protein 5 (FABP5) which target RA to RAR and PPAR ?/?, respectively. The expression ratio of the two binding proteins in cells thus determines cellular responses to RA. The data demonstrate that both in cultured cells and in transgenic mice models of breast cancer, a high CRABP-II/FABP5 ratio targets RA to RAR, thus upregulating growth inhibitory genes, including the cell cycle control protein BTG2, inducing the cleavage of the proapoptotic gene caspase 3, and suppressing carcinoma growth. Conversely, RA is targeted to PPAR ?/? in cells that express a low CRABP-II/FABP5 ratio, thereby enhancing transcription of pro-proliferative genes such as PDK-1, a key component of the Akt survival pathway, and acting as a pro-carcinogenic agent. Finally, we show that modulating the relative expression levels of the two binding proteins in cells and in vivo, results in profound changes in biological responses to RA, thus committing the cell to either life or death.