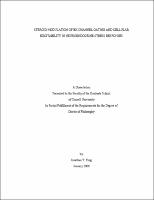 During a stressful event, the adrenal cortex increases the secretion of stress steroid hormones, known as glucocorticoids. Glucocorticoids have a variety of physiological effects aimed to rectify the disruption in homeostasis caused by a stressor. These effects are regulated through genomic mechanisms, but increasing evidence has supported the role of rapid (non-genomic) actions of steroid hormones in the regulation of physiology and behavior. BK channels are prominent regulators of cellular excitability, and are expressed in many different types of tissues including muscle and the brain. In the HPA stress response axis, BK channels could be vital in the control of the feedback mechanisms of the stress response. Stress steroids modulate BK channel splicing and other steroids including estrogens, xenoestrogens, and the androgen DHEA rapidly alter BK channel gating. By rapidly modulating adrenal chromaffin cells and anterior cotricotropes, steroid hormones can regulate and fine-tune the stress response. In the present study, I investigated the role of stress hormones in the rapid modulation of BK channels in different components of the HPA axis. Glucocorticoids released from the adrenal cortex during the stress response rapidly modulate BK channel gating and can facilitating or limit chromaffin cell excitability. By acutely modulating BK channels in chromaffin cells, glucocorticoids can affect adrenaline secretion. I used the heterologous expression system of HEK293 cells to investigate the mechanism responsible for the rapid modulation of BK channels. BK ?2 and ?4 subunits are differentially sensitive to the steroids corticosterone and DHEA. Targeting auxiliary subunits of an K+ ion channel is a novel mechanism for rapid modulation by steroid hormones and could give rise to differential modulation in tissues. Finally, I characterized BK channels that are present in anterior pituitary corticotropes and explored their role as important regulators of excitability. The anterior pituitary in addition to adrenal chromaffin cells could be a target for the acute modulation of stress steroids. Steroids can have both acute and genomic effects to regulate physiology and behavior. Understanding the mechanisms that modulate neuroendocrine interactions will provide valuable insight for stress related disorders.