FORGING THE ORGANIC-INDUSTRIAL DIVIDE: THE NATIONAL ORGANIC PROGRAM AND SMALL-SCALE ORGANIC AGRICULTURE IN 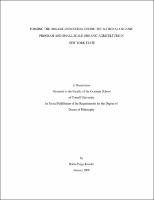 In the last two decades, organics has become the fastest growing sector in U.S. agriculture, transforming the organic movement into an organic industry. However, organic agriculture currently finds itself at a historical crossroads with the 2002 implementation of the USDA?s National Organic Program (NOP), prompting several questions: To what degree will the NOP reflect the goals of the organic movement or work as a proxy for the conventionalization of organic agriculture? How will the NOP affect the structure of organic agriculture? Will the small-scale organic producers that traditionally formed the core of organic agriculture become marginalized or will they continue to thrive? To answer these questions, this work examines the role that the NOP plays in shaping the social organization of the organic marketplace. To begin with, utilizing agrarian political economy and food regime analysis this study places organics more centrally in the emerging trends of the global agro-food system by situating it within the larger historical context of modern food system. In doing so, it explores how agro-food movements, like organic agriculture, play a significant role in a modern food-system that is shaping up around the tensions between the drive by agro-food capital to further embed commodity relations in food production and the resistance to these efforts by agro-food movements. Next, this study examines the national organic standards in a normative framework, an organic standards moral economy, whereby normative conceptions that construct ?good? organic production are codified and institutionalized. This reveals how the NOP facilitates the expansion of a certified organic market that privileges industrially organized production. In addition, this study utilizes interviews with organic producers in New York State to show that, although the NOP is an instrumental tool in reshaping the organic sector to favor conventional practices, due to a complex mix of economic and non-economic factors, the agrarian footprint in New York State supports a market space where small-scale producers are able to thrive. Lastly, this study concludes that there is increasing polarization in the organic marketplace along the lines of a sector organized by market values and one organized by the non-market values.