SEED PREDATION BY INVERTEBRATES: METHODOLOGY AND ASSESSMENT OF REMOVAL RATES IN THE TRANSITION TO AN ORGANIC CASH GRAINS SYSTEM 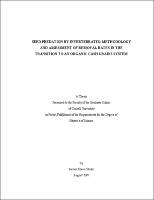 In the development of sustainable agricultural systems, it is increasingly clear that chemical control of weeds must be replaced with effective ecologically-based weed control measures. As part of this effort, seed predators and the associated ecosystem service of weed seed predation were assessed in the transition to an organic cash grains system. Invertebrate activity density was higher in the spelt/clover than in the corn plots, where ?moderate? predation of seeds from all three weed species was highest. By contrast to giant foxtail and common lambsquarters, large-seeded velvetleaf had more instances of ?moderate? removal with vertebrate access (P < 0.01). Invertebrates, however, were primarily responsible for the 20% of samples in 2006 showing ?extensive? (31-100%) velvetleaf removal (P < 0.001). A standardized methodology for evaluating seed predation by invertebrates is needed to increase our capacity to generalize across studies. This work may facilitate transitioning beyond simple ecosystem services assessments into providing a practical set of recommendations for agricultural managers that enhance invertebrate weed seed predation. In a second study, we compared the effect on seed predation of two common methods of offering weed seeds to potential predators: the sandpaper and soil substrate methods. Results suggest caution in using synthetic substrates, such as sandpaper, when assessing predation of small-seeded species (>1 mg seed-1), or when seed predators are predominantly invertebrates. By contrast, predation of the larger-seeded velvetleaf and giant foxtail were less affected by sampling method, perhaps due to greater removal by vertebrates. As a corollary to both studies, we investigated the use of geospatial analysis to estimate spatial autocorrelation of invertebrate populations and seed removal rates. Geospatial analysis revealed significant spatial autocorrelation of insect activity density with the location of clustering varying by insect species and sampling month, with seed removal rates sometimes similarly autocorrelated. Without investigating this spatial component, several instances of strong positive correlation between a spatially autocorrelated invertebrate species and removal of a species of weed would have been unobserved. Failure to consider the clustering in insect populations and associated seed removal rates can cause important effects and/or trends to be masked when averaged across an entire system.