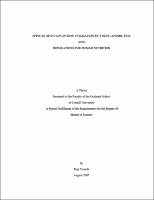 Iron deficiency is the most common nutritional disorder in humans affecting more than 2 billion people around the world. Positive effects of supplemental inulin on iron utilization have been reported in anemic rats. Inulin is a non-digestible carbohydrate that is found in various types of fruits and vegetables. Because pigs are better models for humans than rats, we initially conducted two trials to determine the effects of inulin supplementation on the bioavailability of iron in corn and soybean meal to young anemic pigs. Interestingly, supplemental 4% inulin improved utilization of iron intrinsically present in corn and soybean meal by young pigs as evidenced by the increase in blood hemoglobin concentration. This positive effect of inulin was associated with decreased concentrations of sulfide and increased concentrations of soluble iron in the colon digesta, but not with digesta pH or phytase activity. Two groups have reported > 90% of pre-caecal digestibility of inulin in pigs, and argued against pigs as a proper animal model for humans in this regard. Therefore, we conducted two experiments and collected the digesta samples from various segments of the gastrointestinal (GI) tract (stomach, upper and lower jejunum, ileum, cecum, and three segments of colon) to characterize the hydrolysis profile of inulin. Our data suggested that the cecum is the major degradation site of ingested inulin in the GI tracts of young pigs. Our finding supported continued utilization of pigs as a model of humans for inulin studies. Because various forms and amounts of inulin are found in fruits and vegetables, two more experiments were conducted to compare the efficacy of different types (short, long and 50:50 mixture of short and long) of inulin on the bioavailability of iron to young anemic pigs. Although all three types of inulin enhanced hemoglobin concentration, only the supplementation of Synergy 1, a 50:50 mixture of short and long chain inulin, improved hemoglobin repletion efficiency. Moreover, pigs fed the oligofructose (short chain inulin) supplemented diet showed lowered (P > 0.05) hemoglobin repletion efficiency compared to the basal diet (BD) or the Synergy 1 fed pigs. Our finding suggested that different chain-length inulin may improve hemoglobin concentrations in pigs through different mechanisms. In summary, supplemental inulin improved dietary iron utilization by young anemic pigs, indicating the potential of enhancing inulin content in staple crops for reducing iron deficiency in humans.