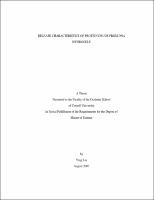 DNA molecules have been used as generic instead of genetic materials to construct nanostructures. Based on Watson-Crick base pairing, a three-arm junction DNA, or Y-shaped DNA (Y-DNA), was first synthesized from three partially complementary oligonucleotides as a basic building block. Each Y-DNA consists of three non-palindromic sticky ends so that it could ligate to other DNA building blocks to form desired nanostructures and DNA hydrogel. The goal of this work was to utilize DNA hydrogel as a protein drug delivery system. In previous work, we created DNA hydrogels that had good swelling abilities, controlled degradation rates and were cytocompatible. In the present studies, we characterized the release of two model proteins, insulin and bovine serum albumin (BSA), from DNA hydrogels. A numerical simulation of the whole release system based on a FEM method was achieved. These initial studies indicate that DNA hydrogels are suitable for delivering proteins for controlled drug delivery and tissue engineering.