TAXONOMIC STUDIES ON PALEOZOIC AND MESOZOIC BEETLES, WITH PHYLOGENETIC INTERPRETATION BASED ON ELYTRAL VENATION AND STRUCTURE 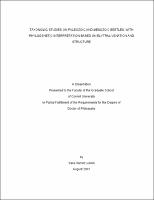 Although the Coleoptera are the largest order of animals and make up about 25% of all species currently living on Earth, there have been very few specialists working on early fossil Coleoptera, so despite the group's importance, the early evolutionary history of the beetles is poorly understood. There is a substantial fossil record of Coleoptera originating in the early Permian. The majority of these fossils are preserved as isolated elytra, the hardened front wings of beetles. In most cases, fossil elytra are not useful for taxonomic identification; however, the very ornate elytra of the earliest Coleoptera include scales, setae, punctures, spines, and rudimentary venation - features that are potentially meaningful in phylogenetic studies. In this first cladistic analysis of Permian and Mesozoic Coleoptera and coleopteroids, elytral characters are used to produce a character matrix which is phylogenetically analyzed using WinClada. The resultant trees show that many of the traditional family arrangements of the early Coleoptera and coleopteroids are not supported by a cladistic analysis of elytral characters and are poly- or paraphyletic. A revised classification system is proposed. The family Tshekardocoleidae is redefined to include only Tshekardocoleus ROHDENDORF, Afrocupes GEERSTEMA AND VAN DER HEEVER and Brochocoleus HONG (in part). Two new families, Moravocoleidae (Moravocoleus KUKALOVA , Permocoleus LUBKIN AND ENGEL, Prosperocoleus KUKALOVA) and Sylvacoleidae (Boscoleus KUKALOVA, Sylvacoleus PONOMARENKO, Umoricoleus KUKALOVA) are created to include some former members of Tshekardocoleidae. Further taxonomic revision, of the families Permocupedidae, Ommatidae and Cupedidae is still needed, but this study provides a framework for further study of the earliest beetles. Because, fossil beetles are most commonly known only from elytral remains, a key to Paleozoic and Mesozoic elytra resembling Archostemata is constructed using only elytral characters to aid in the identification of fossil beetles. Two significant fossil Coleoptera are described. Paracupes svitkoi LUBKIN from a remarkably preserved ninety-million year old beetle head from New Jersey, and Permocoleus wellingtonensis LUBKIN AND ENGEL, the earliest known beetle from the Western Hemisphere. These studies show that on the family level, the diversity of early Coleoptera and Coleopteroids is far greater than previously thought.