TREHALOSE TRANSGENIC LINES IN ORYZA SATIVA L. HAVE ALTERED CARBOHYDRATE PARTITIONING AND UTILIZATION IN RESPONSE TO WATER DEFICIT AND RECOVERY 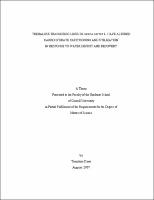 In plants, there is evidence that trehalose, a non-reducing disaccharide, has roles in water stress responses, but its functions in this response are incompletely understood. Previously, investigators created transgenic rice (Oryza sativa, L, cv. Pusa Basmanti) with tissue-specific and stress-dependent promoters that overexpress trehalose synthesis genes (Garg et al. 2002). The current study tested the hypothesis that these transformed genotypes have altered carbohydrate partitioning under water stress. In response to water deficit and recovery treatments, the time course of changes in transpiration rate and leaf abscisic acid concentration were not significantly different between transgenic and non-transgenic plants. Glucose content per g DW was not affected by water stress in leaf blades, upper and lower leaf sheaths in all genotypes except during recovery in the A-line where the stressed plants had lower glucose levels in leaf sheaths. However; sucrose contents per g DW were higher in water stressed transgenic lines compared to their well-watered controls, whereas after rewatering and recovery transgenics had slightly lower sucrose levels than well-watered controls. In contrast, the nontransformed line had minimal or no change in these constituents in response to stress and recovery. Starch levels were decreased 25 to 50% in the upper and lower sheaths of trehalose transformants, but were unaffected by stress in the non-transformed controls. Upon rewatering, starch levels remained at less than 65% of well-watered controls in the three organs of trehalose overexpressing lines, whereas starch levels in the non-transformed line were the same as in well-watered controls. These results are consistent with a role of trehalose in modulating sugar sensing and carbohydrate partitioning among sucrose and starch pools in response to water deficit.