Berlioz, Hoffmann, and the Genre fantastique in French Romanticism 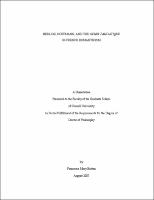 Taking Berlioz's Symphonie fantastique as its focus, this dissertation explores the idea of a musical fantastic in nineteenth-century France. It offers a series of new readings of Berlioz's first symphony that trace the work's connection to literature, politics, visual art, and science, reconnecting it with the broader culture of the fantastic that evolved in late eighteenth- and early nineteenth-century Europe. Drawing extensively on nineteenth-century criticism, it identifies Berlioz as one of the key exponents of the genre fantastique, a musical category closely tied to the works of E.T.A. Hoffmann, Jacques Callot, Victor Hugo, Salvator Rosa, and Dante Alighieri, and theorized in major journals and dictionaries of the period. Chapter One begins by gathering together Berlioz's own commentary on the musical fantastic, examining its implications for form, syntax, and orchestration. It goes on to look at reception of the Symphonie fantastique, tracing theories of the musical fantastic as they emerge in the nineteenth-century press and at broader notions of fantastic genius that permeate Hoffmann's tales and French contes fantastiques. Chapter Two examines relationships between Berlioz's symphonic program and emerging French psychiatric theory, identifying the idee fixe at the center of the work as the primary symptom of a pseudo-scientific disease called monomania. It reopens old questions surrounding the relationship between art and life in the Fantastique, linking Berlioz's symphonic self-fashioning with the strategies of the Romantic confession. Chapter Three turns to questions of sound and form in the musical fantastic, theorizing connections between Berlioz's distorted shapes and experimental timbres and the aesthetics of the grotesque. Here, music is drawn into discourse with visual culture and with notions of literary caricature and humor central to works by Hoffmann, Gautier, Jean-Paul Richter, and Victor Hugo. Expanding outward, Chapter Four examines the broader repertory of the genre fantastique, undermining long-standing notions of Berlioz as an isolated and eccentric composer. It looks not only at other fantastic symphonies but at a range of orchestral, chamber, and keyboard works bearing the "fantastique" label. The fantastic emerges as a concrete musical category and Berlioz as one of the pioneering figures in a vital but little-known compositional tradition