The Limits of Political Jurisprudence in Canada and the United States 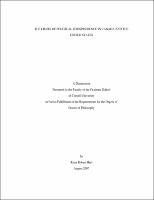