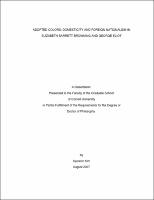 The dissertation explores the trope of lost and recovered children in the narratives of nationalism by Victorian women writers excluded from political participation. Bringing together the narratives of fragmented family and divided allegiance, my project focuses on how women writers constructed an imagined connection with other people's nationalism by subverting deracinated fantasy to explore the tensions between the individual and racial inheritance. Examining the cultural construction of Italians, Gypsies, and Jews in the British nineteenth century, this dissertation investigates the "timeless" fantasies of artistic freedom, liberation, and tolerance associated with landless "dark Others" that contrast with their historical marginalization in England. What appeal to Barrett Browning and Eliot, are not escape from racial inheritance, but the pressing duties of the lost child to preserve history and identity, as she negotiates a role of political leadership that constrains her private choices. Inspired by the struggle of her adopted country to overthrow Austrian rule, Elizabeth Barrett Browning envisioned a national future of Italy in Casa Guidi Windows. Following the fictionalized travel writing of Anna Jameson and Arthur Hugh Clough that attempts to avoid politics in favor of art, I argue that by constructing kinship through Anglo-Italian literary tradition, Barrett Browning advocates the Italian revolutions of 1848 as liberal politics demanding English sympathy through spiritual inheritance. Conversely, Gypsies shed their ?spiritual appeal? to become racial figures, through the rise of Gypsy ethnography, popularized by George Borrow and later the Gyspy Lore Society, who mapped the linguistic and racial origins of the English Romany. The claim to race and history provides no solution for survival in Eliot?s long poem The Spanish Gypsy. Although Fedalma?s interstitial role does not bridge Gypsy and Spain, in Eliot?s last novel Daniel Deronda, the adopted child's claim to racial memory depends on the disinherited daughter. Deronda's origins are legitimized through his reunion with his mother, but the process of inheriting Judaism rests on the tradition of Jewish women writers such as Grace Aguilar, who argued for women's religious education. The "exotic Jewess" Mirah resists conversion and reconstructs racial identity through the memory of her mother's spiritual instruction