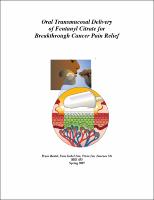 Episodes of breakthrough cancer pain are relatively common occurrences for patients undergoing cancer treatments. Characterized by pain unrestrained by traditional medications, these physical burdens impose a significant degree of suffering. In order to control and eliminate this pain, Actiq, a pharmaceutical lollipop, has been developed to provide rapid oral transmucosal delivery of fentanyl citrate, a potent medicinal narcotic. To elucidate the pharmacokinetics of the drug under various dosages, a computer model of fentanyl diffusion in the oral cavity was designed in COMSOL. Upon solving the model process, concentration profiles of fentanyl in the mucosa over time were developed for various dosages. Sensitivity analyses were also performed to determine the effects of several parameters on fentanyl diffusion. The resulting concentration profiles showed that peak concentrations of 0.00079 g/m3, 0.0016 g/m3, and 0.0032 g/m3 for 200 ?g, 400 ?g, and 800 ?g dosages, respectively, were achieved at approximately 800 seconds. Additionally, based upon the sensitivity analyses, the fentanyl solubility and the lollipop radial dissolution rate have the greatest impact on fentanyl concentration and diffusion. Future research can be performed to optimize the drug diffusion by altering these two parameters, ultimately yielding a more effective Actiq product.