Patch Immunization: Transcutaneous Vaccination for the Cholera Toxin and Optimization of Immunization Cycles 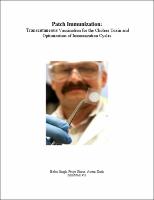