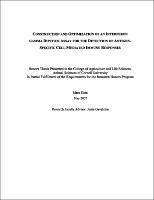 Since 1957, when interferons were discovered, Interferon gamma (IFN-y) has played a crucial role as a diagnostic tool for both humans and animals. Because IFN-y is an antigen-induced protein produced by blood lymphocytes, namely CD4+ T-cells, it is considered the first and foremost form of defense that the host has against infections. Two pathogens that induce a cell mediated immune response (CMI) are Mycobacterium bovis (M. bovis), which causes tuberculosis (TB), and Mycobacterium avium paratuberculosis (Map), which is the causative agent for Johne's disease. Both diseases pose serious health and economic problems for livestock production, particularly cattle. Clinical signs of these diseases are not apparent during the early stages of infection nor are the levels of the mycobacterium high enough to detect. However, since exposure to tuberculin or Johnin antigen by skin testing induces a pathogen-specific CMI response with increased IFN-y, it has been suggested that this assay, in combination, might be useful in the diagnosis of TB or Johne's. However, while IFN-y assays are available, they have qualities that prohibit their routine use in the field. In this study, we report the construction and optimization of a lateral flow assay for determining levels of IFN-y. This assay is also robust, easy-to-use and requires no sophisticated equipment, all qualities that are required for field performance. The format of the assay involves the immobilization of an IFN-y capture antibody onto plastic-backed nitrocellulose membrane using inkjet deposition. Then the sample is allowed to wick vertically up the membrane. Reagents to detect bound IFN-y are then wicked up the membrane and the printed lines of the capture antibody binding IFN-y antigen are developed. Thus far, this assay is sensitive to 1ng/ml IFN-y. When used in combination with skin testing, this IFN-y assay may prove useful in the diagnosis of early mycobacterium infection, and potentially other infections that induce a CMI response.