Diffusion of RFID and 3D Body Scanning for Mass Customization in Apparel Retail: A Consumer Study 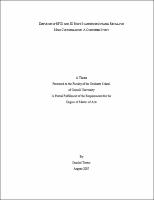 RFID and 3D body scanning were identified as enabling technologies for consumer-centric mass customization in apparel retail. The objective of this research was to investigate consumer knowledge, interest and concerns towards the applications of RFID and 3D body scanning in apparel retail. Rogers? (1995) five factors for innovation diffusion, relative advantage, simplicity, compatibility, observability, and trialability and Bauer?s (1960) perceived risk provided the theoretical framework for the study. Consumer responses were utilized for demographic and behavioral segmentation to identify target markets for retailers deploying RFID and 3D body scanning for specific applications and investigate the consumer acceptance and business deployment of these technologies in apparel retail. Testing prior consumer knowledge of the technologies indicated low knowledge level among consumers. Respondents with prior knowledge of RFID and 3D body scanning had significantly higher acceptance and lower privacy concerns associated with the technologies than respondents without prior knowledge indicating the need to increase the overall knowledge levels through improved literature in popular media and marketing campaigns. Other pre-test results indicated that frequent shoppers had a negative opinion towards apparel shopping suggesting the need to improve the overall shopping experience. While there were no significant differences between male and female responses, female respondents identified size prediction as the most advantageous application of 3D body scanning. Respondents with higher income ($80,000+) and aged 40 or under were significantly more willing to accept RFID and 3D body scanning than the others. Strong acceptance of RFID and 3D body scanning use in a retail store was also observed for frequent shoppers and technology savvy respondents with significantly fewer concerns of price and privacy than other groups. Respondents indicated low willingness to pay a price premium to avail the benefits of RFID and suggested privacy and health concerns associated with RFID use while they were neutral about being scanned in undergarments. A comparative analysis of the two technologies based on Rogers? five factors indicated that 3D body scanning had significantly higher means for relative advantage, simplicity, compatibility and trialability while there was no difference in observability between the two. The results indicated that 3D body scanning had significantly greater diffusion potential among consumers than RFID based on Rogers? factors, but both were evaluated favorably. A technology diffusion matrix was constructed based on prior literature and study results to indicate the current diffusion status of the two technologies based on consumer acceptance and business deployment. Recommendations were proposed to improve the overall knowledge of RFID through effective information dispersion to increase consumer acceptance by debunking myths regarding privacy and health concerns. The need to quantify the benefits of 3D body scanning in the apparel supply chain was identified as a method to increase the overall level of deployment among businesses. A possible apparel retail scenario was recommended based on the results of the study integrating the applications of RFID and 3D body scanning to facilitate the diffusion of both technologies in the apparel industry for mass customization.