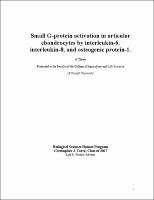 The studies outlined in this honor?s thesis were designed to better understand the mechanisms at both the cellular and molecular levels associated with the onset of osteoarthritis. The horse was used as a model organism, and the experiments were performed on normal equine chondrocytes cultured in vitro. Interleukin-6 (IL-6) and interleukin-8 (IL-8) are known to have catabolic effects on the cartilage matrix while osteogenic protein-1 (OP-1) is a known anabolic factor. There is no complimentary information regarding the effects of these peptides on small G-protein (Cdc42, Rac, and Rho) activation in articular chondrocytes. The objectives of the present study were to determine the activation status of Cdc42, Rac, and Rho after treatment with IL-6, IL-8, or OP-1. The G-proteins play an important role in the maintenance of the actin cytoskeleton and chondrocyte phenotype, so they are of interest because of their clinical relevance in regards to osteoarthritis. To determine a suitable dose for use in these activation assays, chondrocytes were treated in vitro with varying concentrations of IL-6, IL-8, or OP-1, and changes in RNA transcripts of MMP-3, MMP-13, Col2A1, and Aggrecan were quantified using RT-PCR. In the case of IL-6, IL-8, and OP-1, it was determined that a dose of 100ng/mL media stimulated catabolism/anabolism. Chondrocytes were also examined using confocal microscopy following treatment with IL-6, IL-8, or OP-1 to determine if a correlation exists between the normal vs fibroblastic phenotypes and the activation status of the small G-proteins. Our initial hypothesis was that IL-6 and IL-8 would increase Cdc42 and Rac and decrease Rho activity, while OP-1 would have an opposite effect. Activity of the small G-proteins was determined through an affinity binding assay and subsequent western analysis. To date, our experiments indicate that treatment of the chondrocytes with IL-6 and IL-8 resulted in a decreased activity status of Cdc42 and Rac, which is contrary to the initial hypothesis. Studies to determine the effects of OP-1 and the activation status of Rho in response to all treatments are nearing completion.