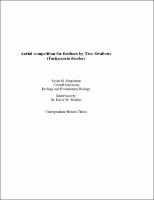 During the breeding season, Tree Swallows (Tachycineta bicolor) scavenge for feathers and use them to line their nests. Nest lining is known to be an important factor in Tree Swallow reproductive success, but competition for feathers has never been experimentally studied despite the fact that acrobatic aerial competitions for feathers are frequent and easily observable. To examine the proximate and ultimate causes of feather contests, I manipulated the nest-lining of breeding swallows and then observed individual behaviors throughout the breeding season. Both males and females gathered feathers, beginning with nest construction and continuing through chick rearing. It is clear that there are two distinct methods of feather gathering: feather ?collection,? an early-season behavior characterized by a lack of interaction with other birds, and feather ?contests,? conspicuous, aggressive interactions involving several birds. Contests over larger feathers were more intense than those over smaller feathers. Early-season contest winners tended to exhibit drop-catch displays with the feather, had well-feathered nests, and were ultimately reproductively successful; there is some evidence that these contest winners may be higher quality individuals. The number of feathers in the nest at the time of a contest was also an important determinant of behavior. A late-season individual with a well-feathered nest tended to participate less in contests and drop the feather more frequently. The associations and feedbacks among contest performance, individual quality, the number of feathers in the nest, and reproductive success indicate that feather contests involve complex behaviors that are highly variable among individuals and change in response to varying conditions.