When getting a meal may cost your life: Exploring the incongruous distribution between the green crab Carcinus maenas and its prey 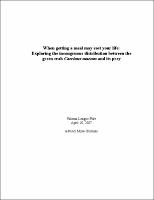 The green crab Carcinus maenas invaded the Gulf of Maine over a hundred years ago and has become a well-established member of intertidal communities. We surveyed the vertical distribution of Carcinus, other crabs, and their potential prey from the intertidal into the shallow subtidal. Carcinus was most abundant in the intertidal and decreased in the subtidal. In contrast, a preferred prey of Carcinus, the mussel Mytilus edulis, had highest densities in the shallow subtidal. Why isn?t Carcinus most abundant where prey densities are highest? A previous experiment revealed a higher mortality rate for Carcinus tethered in the subtidal than in the intertidal. In the subtidal there are higher abundances of the American lobster Homarus americanus and Jonah crab Cancer borealis. We performed a laboratory experiment to investigate the effects of cohabitation with lobster and C. borealis on survival, shelter use, and behavior of Carcinus. Lobsters were the more effective predator on Carcinus, consuming 27% of the crabs during 24 hours. Only 5% of Carcinus were eaten by C. borealis and none by conspecifics used in control treatments. In the presence of lobsters, Carcinus showed significantly more climbing and deep burrowing behavior relative to controls. Our results suggest that the risk of predation by lobsters underlies the scarcity of Carcinus in subtidal communities.