FUNCTIONAL CATEGORIES IN EARLY LANGUAGE ACQUISITION: THE CASE OF DETERMINERS 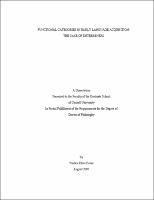 This dissertation explores the status of Functional Categories (FCs) - the grammatical categories that are realized in language by a closed-class set of Function Words (FWs; e.g., ?the?, ?and?) and bound morphemes (e.g., -ed, -s) - in children?s early representation and processing of language. Since FCs play a fundamental role in establishing the structural skeleton of sentences, a crucial question is when and how do children incorporate the functional lexicon into their representation and processing of language. On one view, children initially focus on content words such as nouns and verbs and on the basis of these infer meaning and reference. An opposing view is that FCs guide and facilitate the child?s acquisition of language from the earliest developmental stages. Specifically, by serving as primary cues for word learning, word categorization and sentence computation purposes. This research program investigated whether children may consult the grammatical role of FWs in sentences - in particular, Determiners - already at 1-to-2 years of age. In three experiments, 12, 18, and 24-month-old infants were tested on a preferential-looking task which contrasted grammatical sentences (e.g., ?can you see the ball??), versus three ungrammatical conditions in which the determiner ?the? was either dropped, replaced by a nonsense word, or replaced by an alternate English FW (?and?). Both the 18- and 24-month-olds oriented faster and more accurately to target following grammatical sentences in comparison to the ungrammatical conditions. A group of 12-month-olds tested on the exact same task failed to show such differences. However, another group of 12-month-old infants who were first familiarized with the test nouns and their respective images, oriented faster to target following grammatical sentences in contrast to the two ungrammatical substitution conditions (and/el). These findings demonstrate that already around the 1-year marker - although FWs are typically omitted from children?s productive speech (in English) - infants incorporate syntactic information regarding FWs in sentence processing. This early grammatical sensitivity enables the syntactic categorization of words and facilitates reference determination. This suggests that both lexical (content) word categories as well as functional word categories are developing in tandem during these critical periods in language acquisition.