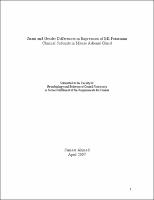 Sexual dimorphisms in adrenal function and distinct behavioral patterns of aggression and ?emotionality? in SJL and C57/BL6 mouse strains led to an intriguing question: are there strain- and/or gender-specific differences in the adrenal gland at the level of ion channels? In this study, we focused on the adrenal medulla, which is a critical component of the neuroendocrine system and responsible for modulating reactions to stress and regulation of various body processes including digestion, the immune system, mood, and energy usage. Secretion of epinephrine (EPI) from chromaffin cells of the adrenal medulla is tightly controlled by the electrophysiologial response generated from neural inputs. Several studies suggest that the intrinsic excitability of these cells is modulated by the number and kenetic properties of large-conductance calcium(2+)-activated potassium ion channels (BK channels). Therefore, we focused on BK channels to study strain- and gender-specific differences in the adrenal gland at the level of ion channels. Stress- and sex-steroids have been shown to regulate alternative splicing of the pore-forming subunit of BK channels (Slo-?) in several experimental contexts, and associated ?-subunits confer on BK channels distinct sensitivities to acute effects of stress- and sex-steroids. Using a real-time PCR technique, we examined mRNA levels for total Slo, STREX (a stress-regulated splice-variant of Slo), ?2, and ?4 in two mouse strains, SJL and C57/BL6. The experimental groups were: SJL males, SJL females, and C57/BL6 males. SJL males expressed significantly higher levels of mRNA for total Slo, ?2, and ?4 than SJL females and C57/BL6 males. STREX levels were not significantly different between the groups, probably due to a small sample size, but on average, SJL males had higher levels of expression than the other two groups. These results suggest that SJL females and C57/BL6 males are relatively similar in their BK channel expression in the adrenals, while SJL males show distinct expression patterns. From this study, we now have grounds for hypothesizing functional relationships between behavior and adrenal function.