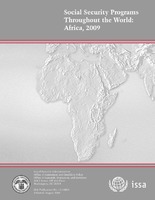 [Excerpt] This third issue in the current four-volume series of Social Security Programs Throughout the World, reports on the countries of Africa. The combined findings of this series, which also includes volumes on Europe, Asia and the Pacific, and the Americas, are published at 6-month intervals over a 2-year period. Each volume highlights features of social security programs in the particular region. This guide serves as an overview of programs in all regions. A few political jurisdictions have been excluded because they have no social security system or have issued no information regarding their social security legislation. In the absence of recent information, national programs reported in previous volumes may also be excluded. In this volume on Africa, the data reported are based on laws and regulations in force in January 2009 or on the last date for which information has been received. Information for each country on types of social security programs, types of mandatory systems for retirement income, contribution rates, and demographic and other statistics related to social security is shown in Tables 1–4 beginning on page 17. The country summaries show each system’s major features. Separate programs in the public sector and specialized funds for such groups as agricultural workers, collective farmers, or the self-employed have not been described in any detail. Benefit arrangements of private employers or individuals are not described in any detail, even though such arrangements may be mandatory in some countries or available as alternatives to statutory programs. The country summaries also do not refer to international social security agreements that may be in force between two or more countries. Those agreements may modify coverage, contributions, and benefit provisions of national laws summarized in the country write-ups. Since the summary format requires brevity, technical terms have been developed that are concise as well as comparable and are applied to all programs. The terminology may therefore differ from national concepts or usage.