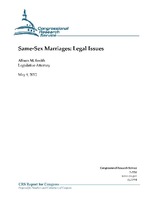 [Excerpt] The recognition of same-sex marriages generates debate on both the federal and state levels. Either legislatively or judicially, same-sex marriage is legal in seven states. Other states allow civil unions or domestic partnerships, which grant all or part of state-level rights, benefits, and/or responsibilities of marriage. Some states have statutes or constitutional amendments limiting marriage to one man and one woman. These variations raise questions about the validity of such unions outside the contracted jurisdiction and have bearing on the distribution of federal benefits. ... This report discusses [The Defense of Marriage Act, or DOMA,] and legal challenges to it. It reviews legal principles applied to determine the validity of a marriage contracted in another state and surveys the various approaches employed by states to enable or to prevent same-sex marriage. The report also examines House and Senate resolutions introduced in previous Congresses proposing a constitutional amendment and limiting federal courts’ jurisdiction to hear or determine any question pertaining to the interpretation of DOMA.