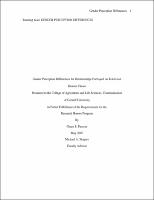 Television and other media influence expectations and perceptions of love and marriage. In this experiment, various gender behaviors of sex and relationships were shown in the context of romantic relationships on television. Participants? interest, character approval, and perceived realism were compared between expected and not-expected gender behavior for white and black television characters. The results indicate that, in general, characters are seen as less real, and receive lower approval ratings, when expected gender behavior is violated. However, male participants may have different perceptions regarding television characters than female participants due to the genre through which romantic relationships are shown on television. These findings contribute to previous research that preconceived gender expectations affect how we perceive and define gender roles in both television shows and reality.