The Equilibrium: Issues of Islamic Education in the United States 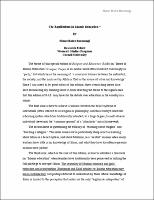 The theme of this special edition of Religion and Education (R&E) on "Issues of Islamic Education" is taqwa. Taqwa is an Arabic word often translated oversimply as "piety," but which bears the meaning of "a conscious balance between the individual, the society, and the limits set by Allah or God as the source of value and knowledge". Since I was asked to be guest editor of this edition, three overarching issues have been formulating my thinking about it, from selecting the theme to the significance that this edition of R&E may have for the debate over education in the country as a whole. The first issue is how to achieve a balance between the belief systems of individuals (often referred to as religion or philosophy) and this country's universal schooling system which has traditionally intended, to a large degree, to meld diverse individual views into the "common-ground" of a "pluralistic" social framework. The second issue is questioning the efficacy of "teaching about religion" and "teaching a religion." This issue comes out in particularly sharp relief in teaching about Islam as a belief system, and about Muslims, in a "neutral" manner when many teachers have little or no knowledge of Islam, and what they have too often represents an inaccurate picture. The third issue, which is the core of this edition, is how to introduce a discourse on "Islamic education" when females have traditionally been perceived as lacking the full privilege to interpret Islam. The centrality of Muslim women's and girls' education and acculturation (Barazangi and Kahf articles) to Islamic education may seem contradictory, and perhaps difficult to understand by those whose knowledge of Islam is limited to the perception that males are the only "legitimate interpreters" of Islamic texts or the perception that females are "oppressed by their patriarchal religion."